The earliest circulating book collection in Grundy Center was started by the Methodist Episcopal Church and the Women's Christian Temperance Union.  The 3,000 books were housed in the WTCU Reading Room in the basement of the county courthouse and maintained as a city library.

In 1910, a design for a library to be built on land purchased from Daniel Kerr and G.W. Morrison, was submitted to American steel tycoon, Andrew Carnegie. Carnegie funded the building of libraries in towns across the country that owned property to build on and showed interested in maintaining the service. The initial plan was rejected because it was considered too large and too costly. A second plan designed by Mr. Geer of Conrad was then submitted. Approved by Carnegie's office, the new building was constructed by Lavritzen and Wasson of Waterloo at a cost of $5,829.20. The Free Public Library of Grundy Center was opened   November 6, 1912, offering about 3,000 books with 30 open hours every week. 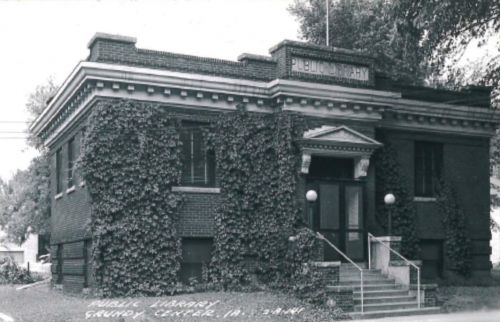 Sixty-one years later, in 1973, the Library Board of Trustees began a remodeling and building project suggested by architect and former city resident, Howard Nickerson Jr. The plan, developed by Stenson and Warm, Inc. of Waterloo, left the Carnegie building intact but included a modern one-story addition onto the south side of the original library.  Local contributions and a $20,000 grant from the Kinney-Lindstrom Foundation were received before the project was started. Cannon-Peterson Company of Reinbeck built the $53,000 addition. The library space now totaled 2,543 square feet to house a collection of 17,000 items. Open house for the completed library was held on November 13, 1973. 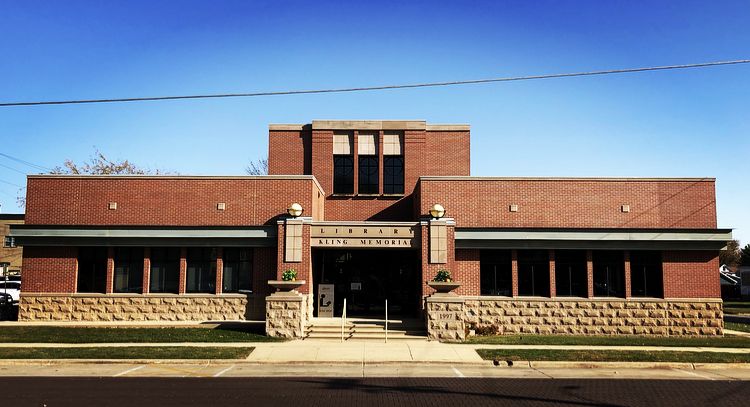 The need to expand services, including access to information through computer technology, and accommodating a growing collection of print and nonprint items led the Board of Trustees to consider the need of a new building. Early in 1996, Building and Finance committees were appointed. Land directly south of the library was purchased from the United Methodist Church.  Architect Jim Novak of Novak Design Group of Cedar Rapids was selected to design the new structure. Fundraising began, and approximately $900,000 in contributions had been secured before the ground-breaking ceremony was held on October 22, 1996.  Peters Construction Corporation of Waterloo built the 9,036 square foot Prairie School Design structure.

Generous donations from local and former residents, businesses, corporations, the Roy J. Carver Charitable Trust, and the R.J. McElroy Grant provided the funds for the $1.2 million building.  The library was named the Kling Memorial Library to honor Ralph and Norma Kling, who contributed substantially to the building project. Their intial donation in the spring of 1996 was a major step in enabling the project to proceed. A few months following Ralph's death in the summer of 1997, Norma presented the library with another major gift.  This additional contribution made it possible to purchase the furnishings for the building, thus assuring that the entire project could be completed.  The Kling Memorial Library was officially opened with a ribbon cutting ceremony on April 7, 1998.